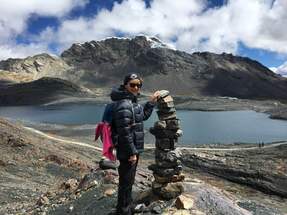 August 2019 - photo of Eileen Wade taken on a 14 day 225km trek of the Cordillera Huayhuash Circuit - described as a challenging climb (up to over 5,000m) - camping around the lakes and mountains.  Good to see the RNSC Masters hat on tour ....!

In memory of our dear friend Meredith .....

4/5 May 2019 - European and Dutch records for Lesley Cordial 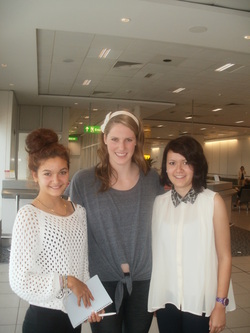 Photo of Grace and Molly with Missy Franklin at Heathrow Airport


Elizabeth Harland of Lane 5 writes:  We thought the Olympics were awesome!  I have attached a photo that I thought might be good for the website. We bumped (almost literally!) into Missy Franklin at Heathrow Airport the day after the closing ceremony.  She was most obliging when my daughters Grace & Molly wanted a photo with her! 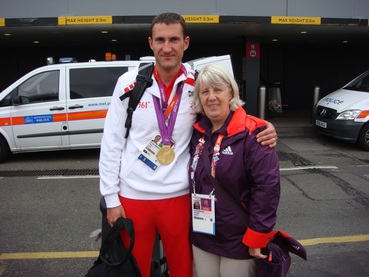 Over the past month I have been volunteering as a games maker at the
Heathrow Terminal 1. During one of my shifts I was lucky enough to meet Giovanni
Cernogoraz, the gold medal winner of the men's trap shooting who was returning
home to Croatia.

The whole games maker experience has been amazing. The team that I worked
with at the airport were a great bunch of people. We met a variety of athletes,
officials and IOC members who had travelled to London from all over the world.
One group of six athletes had travelled from the Cook Islands to get to the
games. It had taken them 24 hours to get to Heathrow. They had to connect in
Auckland, New Zealand and Hong Kong before arriving in London. Finally they had
to endure a long coach ride across the capital to get to the Olympic village in
Stratford.

It was a fantastic opportunity to be part of the London 2012 Olympics,  something that I will remember for many years!
[Updated 06-08-2012] 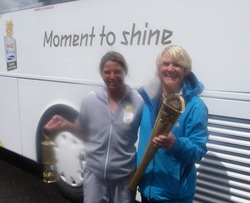 Photo of Anna and her mum Jane Shekhdar

Jane writes: Anna was the medic for the Torch for two weeks.  Yes, the torch needs a medic: well actually because about 350 people travel with the Torch it needs two medics!

The picture was taken at Duxford aerodrome on the 7th of July; I went to meet Anna there during her lunch break. I was allowed on the "officials" side and to hold an unlit torch. What a treat! This photo was taken in front of the official bus during the few minutes when it wasn't raining......