Ruislip Northwood Masters returned from the Isle of Wight with a huge medal haul after a weekend of tremendous swimming. Stan was again Top Man, having collected a staggering medal tally of 11 golds and a bronze (yes, a bronze...well it was breaststroke!).

Sue was runner-up in the Top Female category, having amassed 7 golds and 2 silvers, closely followed by Karen, with 6 golds
and a silver.

Duncan Spicer had a storming meet, winning 6 golds from 6 events – and talking of storming, Mark Braithwaite stormed home to take gold in his first-ever 100 fly, and also took 4 silvers and  2 bronzes to add to his tally.

Joe, Ray and Mike were in direct  competition with each other all weekend, in the most competitive male age group. Honours were fairly even amongst them, with Joe taking 4 golds, a silver and a  bronze; Ray taking 2 golds, 2 silvers and a bronze (all of them despite suffering from cramp all weekend!) and Mike took 4 golds and a silver.

Chris and Roy also had to do battle with each other, although Chris also had his own  personal battle with an official in the 50 breaststroke! Roy began his weekend by taking golds in the 800 f/s, adopting the laid-back Vela approach, by arriving only minutes before his race. He then went on to take 3 silvers and bronze.

Chris had a great weekend. Despite an extremely dubious DQ in the 50 breaststroke he went on to prove that he DID know how to do it by taking gold in the 100 breaststroke, and also claimed 4 silvers and 3 bronzes.

Lauri completed Ruislip’s medal tally by taking super silvers in the 25 and 50 f/s and a bronze in the 100 IM.  Unfortunately Ruislip were unable to retain the team trophy this year, losing by the narrow margin of 16 points to Basingstoke.  Still, an outstanding achievement when up against 23 teams.

This was a fantastic weekend, where although swimming is extremely important, it is FUN that is top of the agenda. So, as soon as next year’s dates are released, put them in your diary and help us regain the trophy! 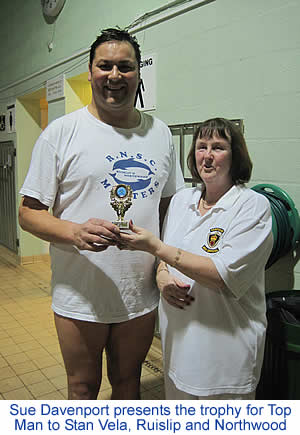